Posted on December 4, 2015 by Michael McCarthy

The results of the latest assessment of research excellence in Australia have been released. Now, every university will spin the results to suit their own purpose*. While we can leave universities to report their results so they appear to shine in the best possible light, it would be interesting to see how different research fields performed.

Which are Australia’s strongest research fields? The broad research fields with the most universities rated above world standard are “Medical and Health Sciences” and “Environmental Science”.

The number of Australian universities “above” or “well above” world standard as rated by the Excellence in Research for Australia process in 2015 for each of the 22 broad research fields. 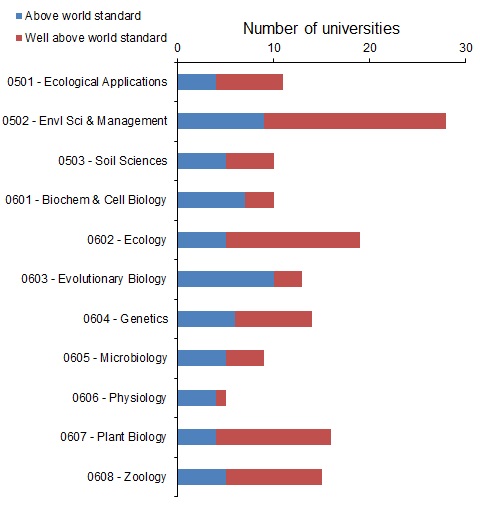 The number of Australian universities “above” or “well above” world standard as assessed by the Excellence in Research for Australia process in 2015 for the disciplines within the Environmental Sciences and Biological Sciences fields.

This strength of Environmental Sciences and Ecology in Australia is also reflected in Australia’s representation in the list of the most highly-cited authors in the Thomson-Reuters list, something I’ve noted previously.

But in terms of bang for buck, it is hard to go past some other fields, such as mathematics, environmental sciences and history.

Research funding to different fields for the three years 2011-2013 as reported for ERA15. Ecology makes up about 15% of the research income in Biological Sciences – a touch under $50 million annually.

So, while the Environmental Sciences and Ecology are not the most heavily funded, they are two of Australia’s strongest research fields. Not only that, this research, conducted across many of Australia’s universities, has a large impact, helping manage Australia’s and the world’s environment more efficiently.

So people, let’s recognize the excellence of environmental and ecological research that occurs across Australia!

* Footnote: ANU even devised their own method for ranking institutions, and you won’t be surprised to know that (judged by their own criteria) ANU won. That outcome was parroted by Campus Review, which failed to note that at least one other university out-performed ANU on at least one of their criteria (the proportion of broad research fields rated above word standard). Universities love playing the ranking game, but I’m surprised a news outlet would publish claims without checking them.

I conduct research on environmental decision making and quantitative ecology. My teaching is mainly at post-grad level at The University of Melbourne.
View all posts by Michael McCarthy →
This entry was posted in Communication and tagged Australia, ecology, Environmental Science, ERA, excellence, research, science. Bookmark the permalink.

3 Responses to Ecology and Environmental Sciences star in ERA15